Hi Guys, we’ve have had a great week in Summers land.. 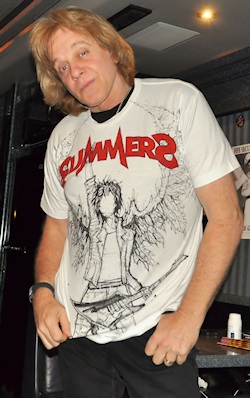 First off we had a great gig on Saturday night, the place was buzzing and you guys made it a great atmosphere. We had people travel all the way from Weymouth and even as far as Italy to come see us. It got soo hot inside that Crash had to go and change his shirt, and even worse the humidity killed Jase’s hair, so if anyone can recommend an industrial strength hair spray please let him know!

Then on Monday morning Ricky & Crash were woken up by a call to tell us that a rock legend who has sold over 28 million records was wearing a Summers T-shirt back stage. So Thank You to Eddie Money for that AND his son who drummed for him for the encore and wore a Summers shirt. So again we can’t thank them enough and we were blown away. We know a lot of you that have seen us live have our new T-shirt but we will also be adding it to the online store very soon!

And wait there is more..

We then checked our emails and found out that we had an amazing review on chesyrockreviews.com about our live show and forthcoming debut album 364. So the smiles got even bigger.

We also did an acoustic set at B&Q HQ this week which was an awesome experience, we have never seen a building like it before and the people were so friendly. It was a nice change for us to strip back the songs and play them with a couple of guitars and concentrate on harmonies.

And then and then…

We had some great news in the evening.. Summers should be heading across the pond this year to play our first gig on US soil. But we will tell you more about this when all is confirmed.

We hope you guys have a great weekend, and those of you in the UK – enjoy the extra long Bank Holiday…